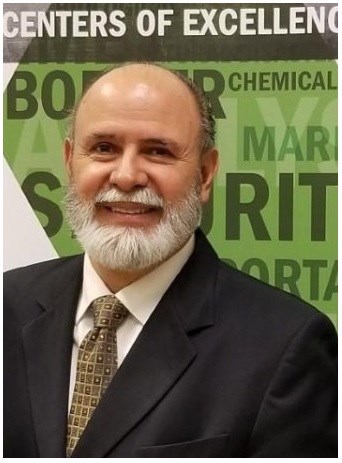 Gary J. Hale is a policy expert who completed a thirty-seven year career within the U.S federal government and specializes in Mexican and United States national and border security issues.

Hale holds a Bachelor of Science in Computer Sciences from Franklin Pierce University, Nashua, New Hampshire and an LL.M. (Legum Magister) in European Law and Judicial Policy from the Universidad de Almería, Spain. Hale is an alumnus of the Harvard University Kennedy School of Government and the University of Virginia’s Darden School of Leadership. Hale is a native of Laredo, Texas, is a polyglot who speaks English, Spanish, German and beginner level Arabic.

Hale began his federal career as a radio intercept operator while serving in the U.S. Army and worked on Soviet, Communist Bloc, Middle East and North Africa issues while stationed at overseas in Europe (1972 -1977.) During his last assignment he served as an Executive Agent for the National Security Agency at the U.S. Air Force School of Applied Cryptologic Sciences at Goodfellow Air Force Base in San Angelo, Texas (1977- 1978.) Hale served a total of six years in the Army and is a decorated service-disabled veteran.

Hale joined the Drug Enforcement Administration (DEA) in 1979 and rose to the rank of the senior DEA Intelligence Officer operating on both sides of the U.S.-Mexico border during his last posting in Houston where he reported both to the DEA and to the Office of the Director of National Intelligence in Washington, D.C.

Hale was the Embassy Intelligence Coordinator, U.S. Embassy La Paz, Bolivia from 1987-1990. In 1990 Hale received the DEA Administrator’s Award, the agency’s highest recognition, for conceiving and implementing Operation Screaming Eagle that led to the seizure of hundreds of general aviation aircraft involved in cocaine transport throughout Bolivia, Peru and Colombia. He also directed a tactical operation that resulted in the capture of Roberto Suarez-Gomez, known as Bolivia’s “King of Cocaine.” Hale also received a Special Act Award for his participation in pre-invasion intelligence Operation Blue Spoon before the invasion of Panama. He was also in charge of the arrest of Panamanian dictator, Manuel Noriega during Operation Just Cause.

Hale had various assignments in Washington, D.C. (1990-2000) including assignment as Chief, DEA HQs Intelligence Publications Unit where he authored, edited, proofed, laid-out and published national-level strategic analysis publications such as the International Narcotics Control Strategy Report; the National Narcotics Intelligence Consumers Committee Annual Assessment; the Worldwide Cocaine Situation Report; numerous Country Profiles; the Laboratory Lexicon - A Guide to Cocaine Laboratory Terminology and others. Hale served on a multi-agency fact-finding panel of intelligence experts commissioned by Attorney General Janet Reno to assess the drug, crime and security situation in the Caribbean as it related to the overall threat to the U.S. Hale subsequently authored and briefed a theatre-wide assessment to General Reno and other policy makers.

He developed policy by formulating a Target Specific Information (TSI) protocol that provided a legal mechanism for federal law enforcement agencies to request support from the National Signals Intelligence system.

In 1993, Hale served a tour of duty at the U.S. Embassy Bogota, Colombia where he participated in the capture of Pablo Escobar and the demise of the Medellin Cartel. He was honored by the Colombian National Police for implementing Operación Aguila, an “air-bridge” route denial operation that seized aircraft transporting cocaine from Bolivia and Peru by the Medellin Cartel.

In 1995, Hale was recognized by Attorney General Janet Reno as a “Hispanic Hero Serving America.” In 1998, Hale served at the U.S. Embassy in Mexico City where he participated in the capture of head of the Juarez Cartel, Amado Carrillo-Fuentes, also known as the “Lord of the Skies.” He also participated in the hunt for Agustin Vasquez-Mendoza, a federal fugitive who killed a DEA Agent in Phoenix, Arizona in 1994 and who hid from authorities in the mountains of the state of Michoacán, Mexico.

As Chief of Intelligence, DEA Houston Field Division during the 2000’s. Hale authored a drug policy paper including the first-ever DEA submission to the Presidential Daily Brief. He also conceptualized and developed an Alternate Futures - Red Cell Analysis for Washington policy makers and served as a speaker and panel member for the bi-lateral drug policy plenary sessions in Cuernavaca, Washington, San Antonio and Houston along with both U.S. and Mexico Cabinet members, agency heads, and members of the U.S. Congress. In November 2008, Hale served as a Mexico expert for the White House Presidential Transition Team by providing policy direction on the issue of cross-border, or spill-over violence from Mexico to the United States. In this role, he crafted the federal government definition for spill-over violence and assisted the intelligence community with preparing a briefing for the president-elect.

In January 2011, Hale joined the U.S. Embassy in Mexico City as an Law Enforcement Intelligence Program Coordinator for the Merida Initiative. Hale worked closely with U.S. and Government of Mexico (GOM) officials to aid in the analysis of law enforcement intelligence needs and to determine, help define, and to document program requirements, activities and functions. Hale assisted in the development of intelligence requirements, all‐source intelligence‐gathering and fusion, development of data collation structures, conduct of research and analysis; development of reporting and dissemination procedures and products, operational planning; force structure and personnel specializations; training and career development; ethics, corruption, vetting, internal affairs, and polygraph.

In October 2012, Hale formed The Center for Trans-Border Security Policy as a forum for Mexican and U.S. academics, jurists, business leaders, students, statesmen and government officials to monitor, assess and analyze Trans-Border Spill-Over Incidents from San Diego to Brownsville. The Center provided objective data analysis and reporting with policy recommendations; produced policy recommendations for maintaining safe borders while ensuring security, continued economic growth and sound immigration policies; advocated for U.S. and Mexico victims of cross-border violence by way of providing information and facts; reviewed and assessed the alleged terrorist-cartel links and their impact on the U.S. Mexico border; provided training and education recommendations to state and federal law makers in order to enact legislation sensitivity training on migrant and other issues a requirement for all local, state, federal and military agents assigned to any border states - northern and southern borders, and served as a resource for U.S. and Mexico local, state and federal agencies operating on the border. Hale sponsored the inaugural conference of the Center for Trans-Border Security Policy in Laredo, Texas on October 26, 2012.

In August 2015, Hale was appointed as the Principal Investigator for a research project funded by the U.S. Department of Homeland Security (DHS) under through the DHS Office of Science & Technology and the University of Houston Center of Excellence (COE) for Borders, Trade and Immigration.

As Principal Investigator, Hale provided leadership to a team of scholars and scientists who developed mitigation strategies for a project entitled “Uncovering Human Smuggling Patterns from Guatemala to the U.S.” The primary objective and deliverable of this research project was to develop the “Unknown Got-Aways” (Estimated Illegal Entries) element of the Total Interdiction Rate (TIR) Formula which is used as a measure of effectiveness by the USBP and DHS.

In addition, this research yielded other benefits including an understanding of the capacity of the human smuggling networks that pass migrants from Central America through Mexico and into the United States. The project also collected information about the geography of the routes taken by migrants and incorporated Geographic Information System (GIS) capabilities to catalogue and map data collected during interviews of migrants, as well as information obtained from open sources. The resulting analysis produced a better understanding of the waypoints, support structures and major decision points of the routes taken or used by the migrants and provided DHS and USBP with a model for the development of a quantifiable variable for “Unknown Got-Aways” aspect of the TIR formula.

Hale has testified as a Subject Matter Expert for asylum cases in federal immigration courts in Dallas and Houston, Texas. His testimony covered the loss of governance and rule of law in Mexico and the implications of Mexican government acquiesce to power sharing with non-government entities as it relates to the United Nations Convention Against Torture (UNCAT) of 1984.

Hale owns Voir Dire International, LLC based in Katy, Fort Bend County, Texas. His business provides operational and analytical products to government, academia, attorneys and the courts as well as the public. The operational side of the business provides employment screening and polygraph services, Spanish language translations and international security related investigations. The analytical side of the business provides research and analysis, studies, risk and threat analysis and the works are published in academic journals and mainstream media outlets.